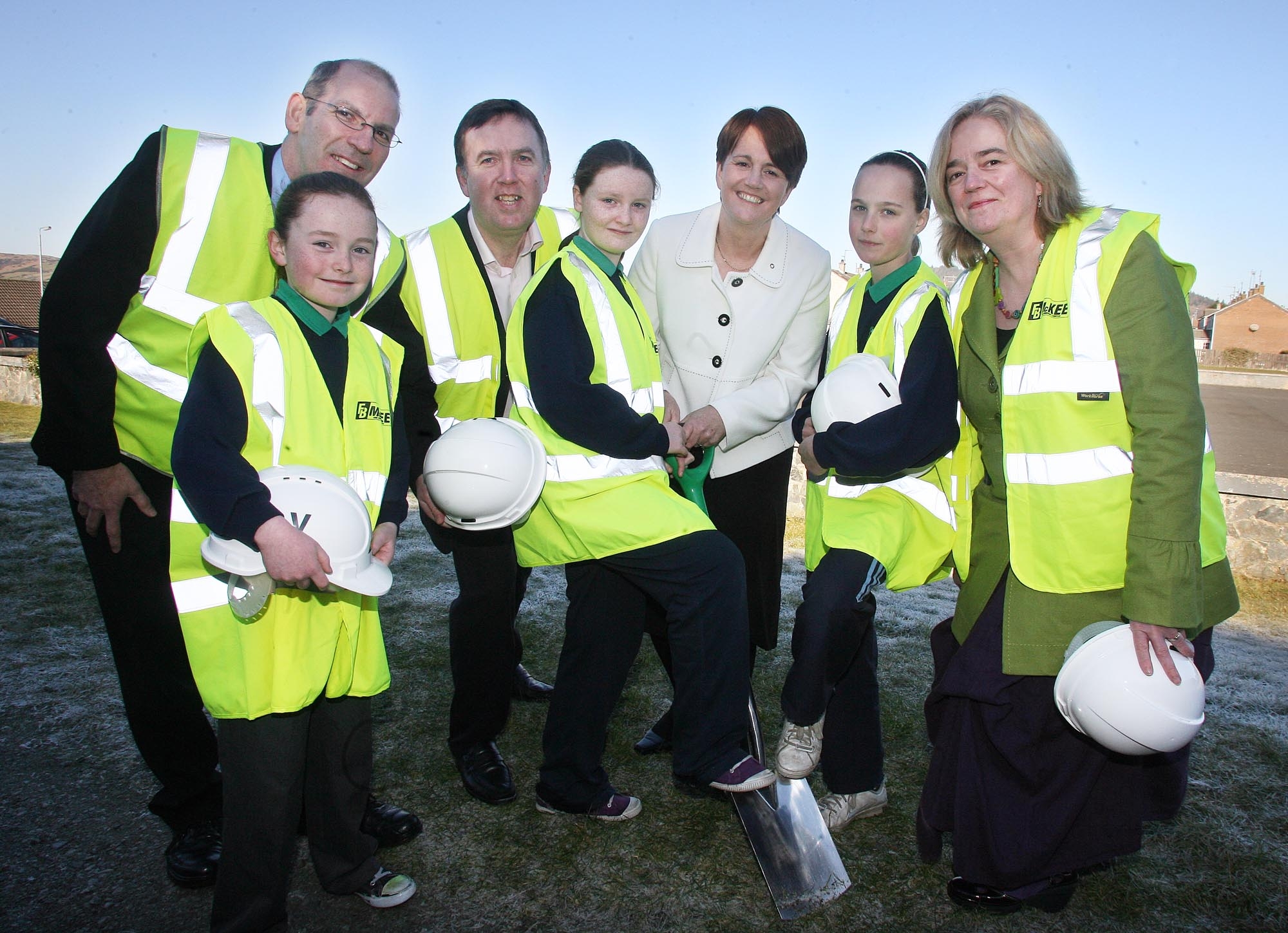 EDUCATION Minister Caitríona Ruane yesterday (Tuesday) morning cut the first sod at the site in Castlewellan for a new building for Bunscoil Bheanna Boirche at Bunker’s Hill in the town.
The school classrooms were destroyed in an arson attack in August 2009 and since then the school has been in temporary accommodation provided by the South Eastern Education and Library Board.

The costs of the new building will be met by Iontaobhas na Gaelscolaíochta [InaG], the Trust Fund for Irish Medium Education. The total cost of the accommodation and related site works will be in the region of £500,000, the contractor being F. B. McKee.
Pilib Ó Ruanaí, from InaG, said he was looking forward to seeing the school in its new accommodation in July/ August, in time for the new school year “Despite all the setbacks that this school has faced it has managed to overcome them and come out stronger. Bunscoil Bheanna Boirche has continued to deliver a first class education and has succeeded in convincing the community of South Down of the benefits of bilingualism.
“Come September this school will have the facilities to match its ambition and I expect to see this school flourish and grow,” he stated.
“I would like to thank the Minister for the support she has provided to InaG that has enabled us to meet the accommodation needs of this and other Irish medium education schools.’

A cheque for £12,600 was presented to Naíscoil Uachtar Tíre following the cutting of the first sod for the new Bunscoil Bheanna Boirche in Castlewellan on Tuesday. The money was raised through an event at the Europa Hotel, which was organised by lontaobhas na Gaelscolaíochta and the McCracken Summer School. Displaying the cheque are (from left): Ailbhe Lemoine, Emer O’Hagan, Pilib O Ruanaí, Mary McCann, Caitriona Ruane, Caitlín Ní Ruanaidh and Caroline Clarke.
After the sod-cutting event the Minister presented a cheque for £12,600 to the feeder pre-school Naíscoil Uachtar Tíre, representing money that was raised at an event in Belfast in the summer by the McCracken Summer School to show solidarity after the arson attack.
School principal Aedin Ní Ghadhra said she saw yesterday’s events as the beginning of a new phase in the development of Bunscoil Bheanna Boirche.
“The school was set up in 1997 and recognised by the Department of Education in 2003,” she said. “We are now reaching maturity as a school and these new premises show that Irish medium education is now part of mainstream education in South Down.
“Our promise to parents is that we will deliver the curriculum in full to your children and at the end of their primary schooling your children will be bi-lingual.
“We would like to thank Iontaobhas na Gaelscolaíochta for their ongoing support. We would also like to thank Mairtín Mac Cathmhaoil and all involved with the McCracken Summer School for their gift to the Naíscoil.
“We also want to pay tribute to the founder parents whose vision for Irish-medium education in the Castlewellan area has been realised,” the principal added.