Three Irish language schools bodies in the north and south have pooled their resources to produce information leaflets in range of foreign languages. These leaflets explain to parents who do not speak Irish or English the benefits that education through Irish can bring to their children.   Dr Réamaí Mathers from Iontaobhas na Gaelscolaíochta (The Trust Fund for Irish-medium Education), who were a lead partner in the project said “The leaflets have been produced in 7 languages;  Irish, English, Portuguese, Polish, Russian, French and Romanian.  The information contain is about explaining to parents the opportunities that exist in the Irish-medium sector.  Ongoing research and experience tells us that children who are educated in a way that nourishes multilingualism benefit academically and are more likely to open be people from other backgrounds. 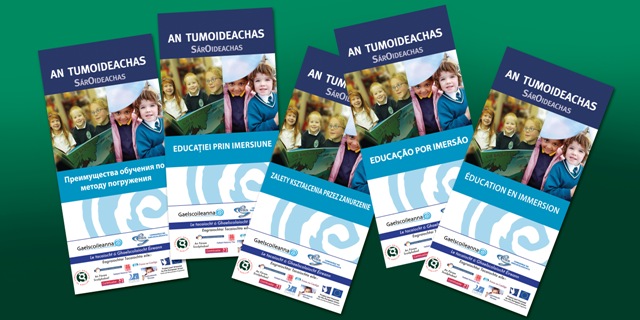 Dr Mathers continued “Irish-medium education is all about cherishing difference and valuing the Gaelic culture and linguistic heritage as part of a broad global diversity.  There are already a significant number of children from a range or ethnic and linguistic backgrounds attending our schools but we feel that many parents who are new to this country simply don’t know that they can send their children to our schools”.

“Feedback from parents of children from different linguistic groups who attend Irish-medium schools has been positive.  Parents find that because their children are in an environment that values language this in turn often enhances their child’s view  towards their own language while they also acquire Irish and English.  As most children in a Irish-medium school environment do not have Gaelic as a home language this means that children from an English or other non Irish linguistic background are actually starting on a more level ‘playing field’ than would be the case in English language schools.  By the time child begins to formally learn literacy English they are usually fluent speakers not only of their home language but also in English and Irish, having acquired these languages from teachers and their peers both within and without the school.”
As with all parents the one thing we encourage parents to do with their children is to talk and read with them no matter what language.  In this way their children will move towards multilingualism having access to Irish English and their home language in a school system that values diversity.