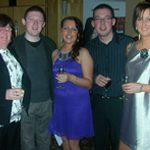 Thank you one and all for attending tonight’s event and a quick thank you to our sponsors for their support for the evening. We are here tonight, first and foremost to enjoy ourselves and to celebrate St Patrick’s Day in the same manner as Irish people have done for hundreds of years.

We are also here to focus on and to celebrate the achievements of the Irish medium education sector in the north. It has been another year of steady progress and consolidation. The slideshow shows much better than my words can describe the end product of the work we are involved in. We have left copies of a colour magazine on the tables, which explains in greater detail what we are endeavouring to achieve in the Irish medium sector. 60,000 copies of this have gone out with today’s Irish News. Please take a copy home and read it at your leisure.

I want to provide a brief snap shot of what has been achieved over the course of this last year.

Gaelscoil Ghleann Darach, Crumlin, was granted recognition in September 2007 after four long years of struggle as an independent unfunded school. If ever there was a tale of overcoming adversity this was it. The amount of obstacles this group of parents had to overcome is long and daunting. But they did overcome them and now they are in a strong position to achieve their vision of providing Irish medium education in the Crumlin area. I can see nothing but good things for this project in the future.

Iontaobhas na Gaelscolaíochta played a role in supporting the efforts of those parents by providing grant aid for the years they were unfunded and by providing funding for their new classroom and the new pre-school accommodation.

Naíscoil na mBeann was opened in Kilkeel in January of this year. This group, under the leadership of my old classmate Eamonn Rodgers has constructed an excellent pre-school facility that is a first step to reintroducing the Irish language into the kingdom of the Mournes. Again, we were able to provide some financial support, but the voluntary effort of those people had to be seen to be believed. And if this display of enterprise and sheer determination is anything to go by, Naíscoil na nBeann is going to be the start of something big in and around south Down.

Bunscoil an Traonaigh, Lisnaskea moved onto a new site and new accommodation provided by Iontaobhas na Gaelscolaíochta. The school had been set up in the car park of the local GAA club Emmets in the town and needed to find another site that was big enough to enable it to meet the needs of delivering education in Irish in an area with a fast growing population. With help from Foras na Gaeilge we were able to provide new accommodation for the naíscoil. The parents’ committee have now embarked wholeheartedly on a campaign to market the school and to sell the benefits of Irish medium education and bilingualism to a whole new public.

We have provided the context that will allow this school to demonstrate its viability and to fulfil the criteria for capital funding laid out by the Department of Education. It is now up to the staff, governors and parents to fulfil the potential of the school.

These are good examples of how we spend the money that is given to us in the form of grants or private donations. The growth of the Irish medium education sector and indeed, the growth of the Irish language in the north has created a knock on effect, with the success of one project inspiring another to be set up. This is the type of challenge that appeals to us.

In the past year InaG has attracted significant private donations: Clára Nic Giolla, a committed activist for the Irish language as well as for the third world has left her house to the InaG; a south Derry businssman has given a gift of £50,000 to the trust. The good news is that Education minister Caitríona Ruane has agreed to match fund those gifts, which means we have an additional £220,000 in total which will be invested in the sector this year, as a result of the commitment of our two donors.

In addition, we have been gifted Áras Ghlór na nGael, the building at Mulholland Terrace, Falls Road, which has been valued at £560,000, which we will use as security to enhance the sector. Eddie Keenan, Rosa Nic Lochlainn and Tarlach Ó Branagáin are here tonight and we are delighted that they have entrusted InaG with this asset, which was acquired with the sweat and sacrifice of different generations of Irish speakers in Belfast. Tyrone businessman Brian McKenna has gifted us £5000 and Belfast exile Pat Corrigan has given a gift of £3000.

As well as those large gifts we have TACA, the lottery. Every penny thrown into a TACA collection box gets recycled back into the sector. TACA now has 300 people who give monthly – sums from £5 to £50. This planned giving enables us to claim the tax through Gift Aid and improves our ability to spend the money for the good of the children.

There are many reasons why people choose to support our cause:

For many Irish people who don’t speak the language they feel like adopted children who want to know who their birth parents are: what they look like, sound like and think like. The Irish language is part of our dna.

Cormac Ó Gráda quotes from a source from Rann na Feirste on the destructive impact of the famine on the language and culture:

Fun and recreation disappeared. Poetry, music and dance stopped. The people lost and forgot all of that and when life improved in some respects , these things didn’t come back as they had been.

We all know things never stay the same and we cannot turn back the clock even if we wanted.

But our naíscoileanna and bunscoileanna provide a link to the language and the culture that has existed on this island in some form for more than 2000 years and they are producing talented, multi lingual people with the skills to make their way in business, arts and science in the 21st century.

Our job is to turn that goodwill into fundraising opportunities and enable magical things to happen.

Our job as fundraisers is to tell the inspirational stories that happen every day in our sector. When we have done that in the proper manner donors have responded and have become a part of our network, our family that we here belong to.

It is about framing the message in the correct way. A good example of this pitching your message to the right audience is the story about Maggie Thatcher in her heyday, walking down Whitehall, surrounded by her flunkies when she sees on the other side of the road a poor man down on his luck, with a sign that says Falklands Veteran, Please Help.

Of course Maggie sees a great opportunity to show her concern for any unfortunate soldiers who have fought for Queen and country and orders one of her aides to get her £20. She goes over and throws the money into the veteran’s hat, expressing sympathy with his plight and walks off.

Become a persuader for the Irish language. Let the whisper become a loud voice that can be heard loud and proud.

Click here to see gallery of photos from event.