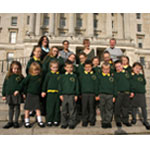 The Minister of Education, MLA’s, Business people, and representatives from the All-Island language body (Foras na Gaeilge, The Ulster Scots Agency) gathered recently at Stormont for the launch of the latest fundraising campaign to support the growth and development of Irish or Gaelic-Medium Education.

“Less than 1% of children in English language education learn any other language fluently, we can boast almost 100%. The internationally tried and tested method of ‘immersion education’ allows our children to become bilingual, to value both English, Irish and increasingly third and fourth languages”.

“Immersion Education is now common throughout these islands with Gaelic language schools increasingly coming to the fore in Scotland, the Isle of Man, and throughout the island of Ireland with Welsh Medium also a norm in Wales”.

He concluded by staing:

“What we are doing today is making our case to business and government about the cultural and educational importance of our trust fund’s work and inviting support from the private sector to match the commitment already given by government. Indeed private donations have already reached over £1 million and the campaign is just launched!”