£20m within the next 10 years is an ambitious target. However, Iontaobhas Fund Raising Manager Réamaí Mathers is confident that the target will be met and indeed exceeded. Having taken up his new job only 3 months ago Réamaí can see already that the public, along with individuals and groups are enthusiastic about donating to the Irish-Medium schools. 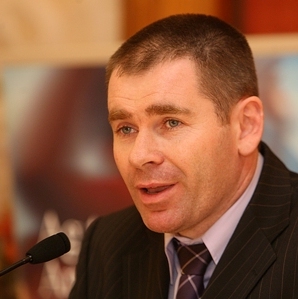 The record which the Iontaobhas has in managing money efficiently and productively will be an added incentive to the donors to donate he believes. With a £200,000 donation from Whiterock Industrial Enterprises, a substantial increase in the number of direct debit donations and an increasing income from TACA the first year of the new project seems positive.“It is a big ask” says Réamaí. “However, we have a tremendous staff here at the Iontaobhas and TACA, a proven track record in attracting money and using it wisely, and above all an immense amount of goodwill within the public here in Ireland and abroad.

Our main aim is to harness that goodwill in a way that allows us to show those who donate that their money is being used wisely, efficiently and in a transparent fashion to maximum advantage of the children in the schools.
I’ve no doubt that we will succeed in this task of finding £2m a year to keep the Irish-medium schools at the forefront of education here in the North.”Más mian leat cuidiú le hIontaobhas na Gaelscolaíochta thig eolas a fháil faoi sin ach dul i dteagmháil linn. Sonraí teagmhála: Iontaobhas na Gaelscolaíochta, 199 Br na bhFál, Béal Feirste, bt12 6FB. Teil: 02890 241510. Ríomhphost:eolas@iontaobhasnag.com. Láithreán; www.iontaobhasnag.com